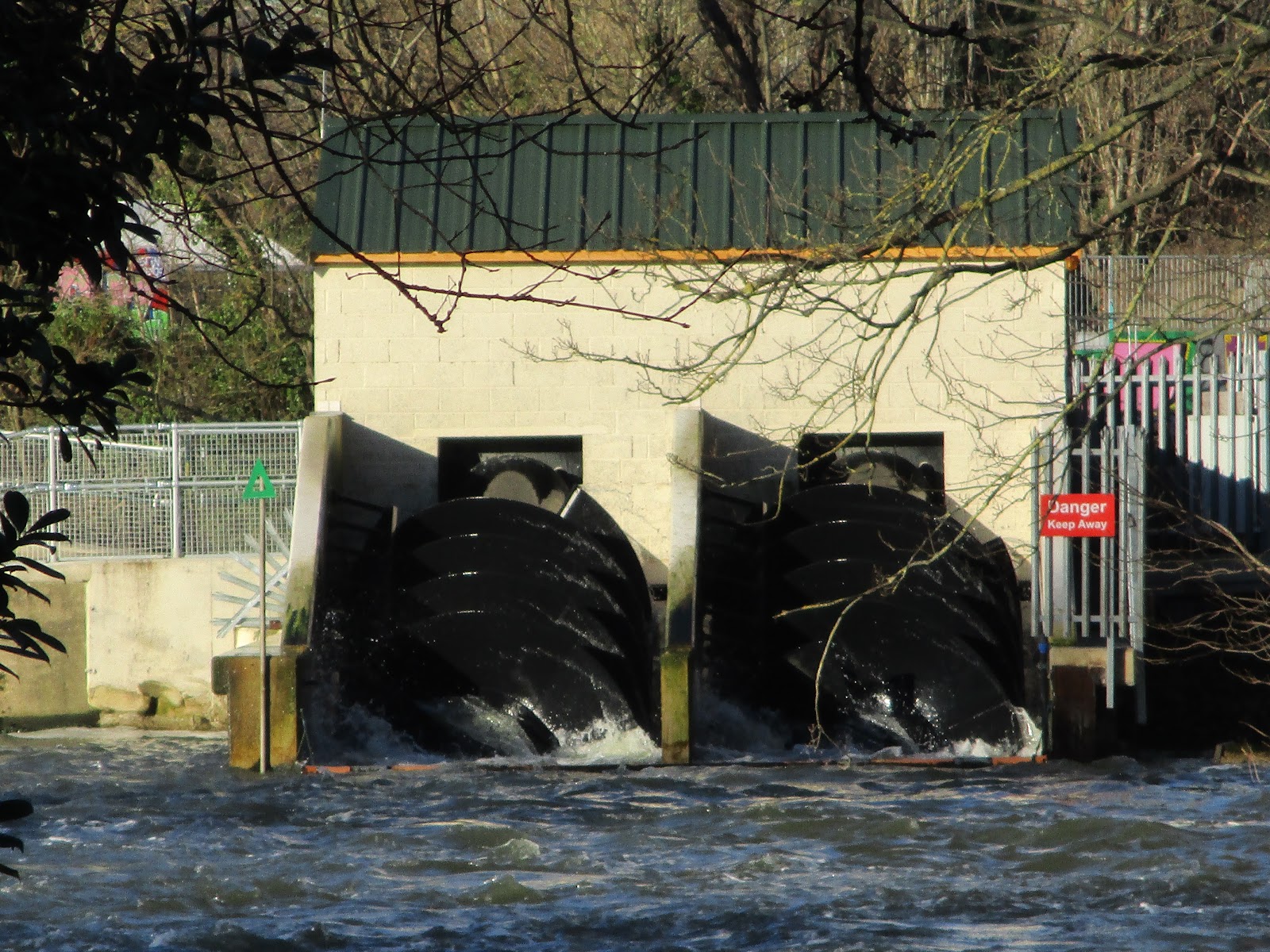 As the culmination of many years of hard work, persistence and dedication, the “Reading Hydro” microhydropower system has been generating electricity on Caversham Weir (Reading, UK) since 13 August 2021. With a drop (“Head”) of about 1.4 metres and an average river water flow of 3 cubic metres per second ("cumecs") passing through each one, its twin turbines (weighing in at almost 6 tonnes apiece, and named “Tony” and “Sophie”, after the project leaders, Dr Tony Cowling and Sophie London) generate a combined output of 46 kW, and are expected to deliver 320,000 kWh (320 MWh) over a year, which is equivalent to the typical electricity consumption of 90 homes. [The turbines could produce 65 kW, but the generators are set at 46 kW, which is the limit above which feed-in tariffs would not be obtained].

The turbines are of an Archimedes Screw Design, which converts the energy from flowing river water into rotational energy, since the weight of water entering the screw presses down onto its blades, and forces it to turn. The upper end of the turbine is connected via a gearbox to an electrical generator, and the water, having passed through its length, flows freely on into the river. The scheme is owned and operated by a community benefit society (Reading Hydro CBS), which was founded in 2017, and the required funding (£1.2 million) was raised through offering shares to the local community. 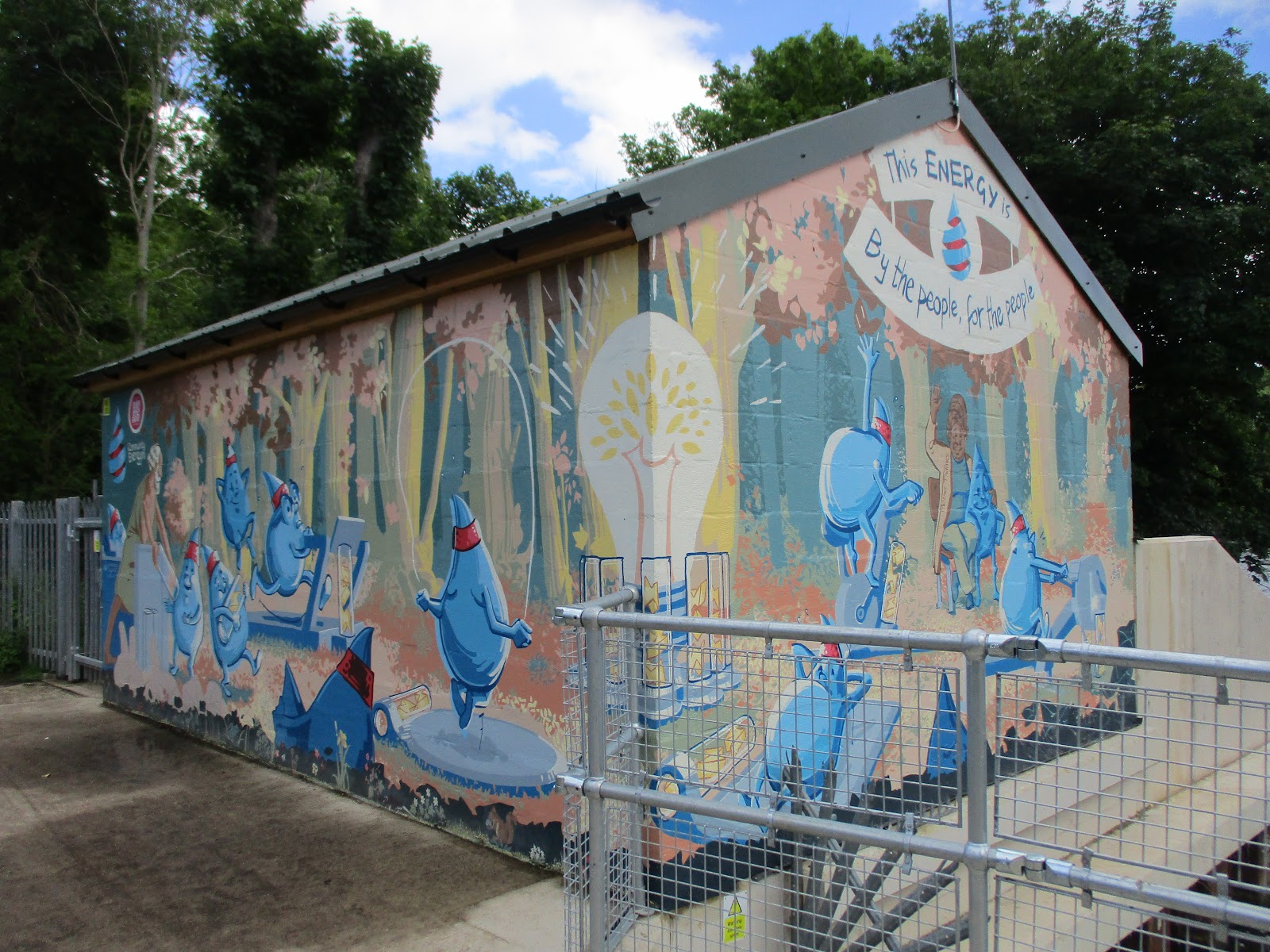 The turbine house has been decorated on two sides with a mural by a group of young artists, Commando Jugendstil, entitled Community Energym, which represents the sustainable power that Reading Hydro will generate for the local community, with the slogan: “This Energy is By the people, for the people.” On a third side of the building is a depiction of Warming Stripes, a visual representation of the change in average global temperature that has occurred since 1850, and devised by Professor Ed Hawkins of Reading University. Thus, emphasis is given to the importance of renewable energy – such as hydropower – in displacing fossil fuels and their emissions. 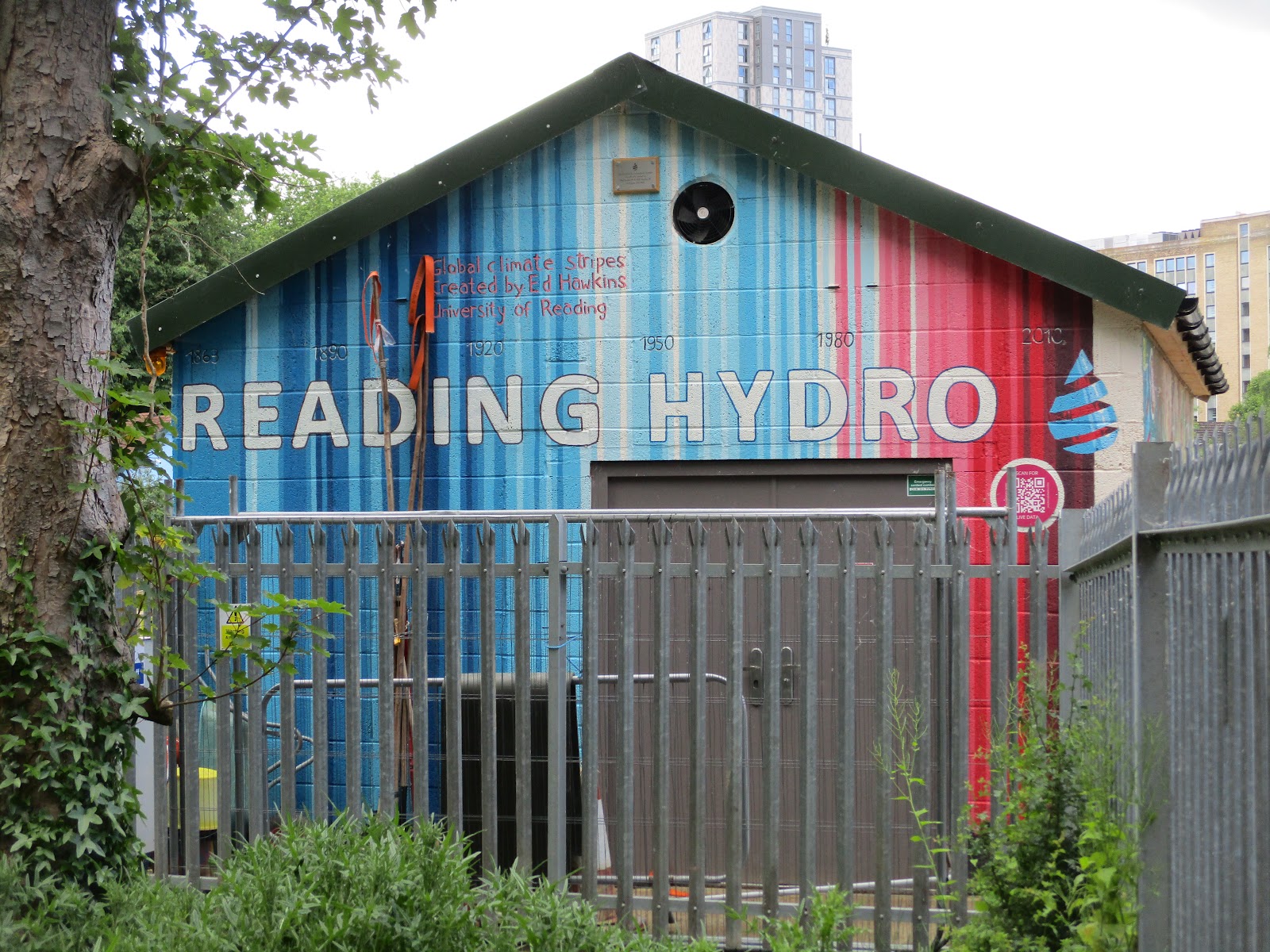 Clearly, a substantial upfront investment in fossil fuel energy is required, to make the steel and concrete, transport the turbines etc., and to construct the entire facility. Nonetheless, the technology appears to offer a very good longer term energy investment, given that the EROI (energy return on investment) for microhydro power schemes has been reckoned at 41-78, as integrated over a 50 year period [and perhaps three times as much over 100 years and with reduced transportation energy costs, although there would most likely be energy needed for maintenance and repairs over such a long time]. Moreover, the harvested energy is “clean”, i.e. carbon-free, and also contributes toward local community resilience.

There are often concerns raised about the environmental impacts of renewable energy sources, and Reading Hydro is no exception. However, the Archimedes Screw design is “fish friendly”, meaning that fish can pass, unharmed, down the turbine and into the river, although they can’t swim back to the top again. Thus, to allow them a safe return passage, a new fish pass was sculpted-out on the immediately adjacent View Island, as an essential part of the overall approval process for building the facility. The fish pass crosses this tranquil and leafy island as a sinuously flowing stream, and both fish and eels can be seen swimming along its length, resting as necessary among the artificial reeds. It is, therefore, a very pleasant place to visit, along with the excellent educational aspects, and "feel" for what energy really means, offered by the microhydropower installation itself. 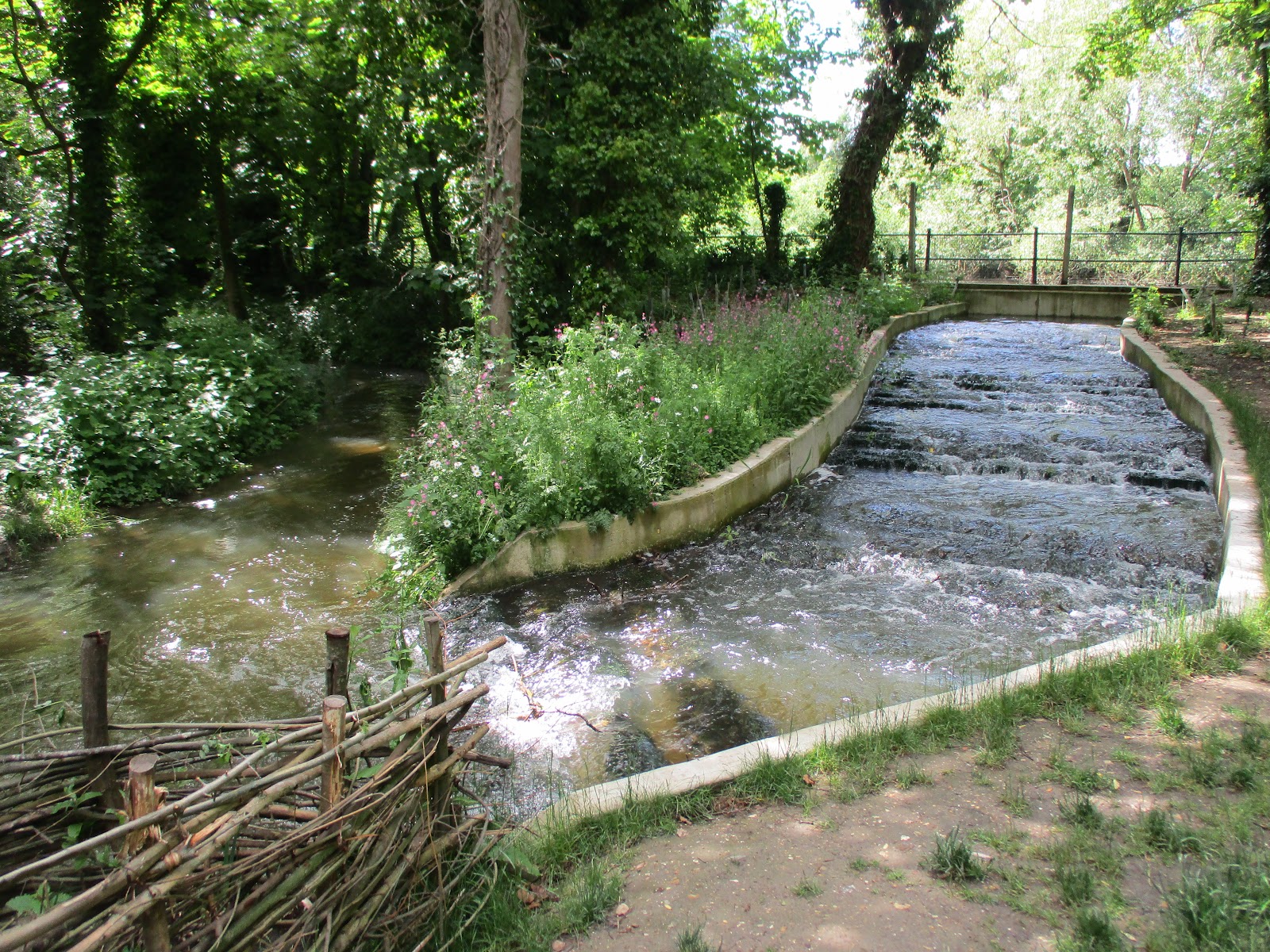 Both the Turbine House and View Island are accessible via a public footpath (known to locals as The Clappers) that crosses over the lock and the weir. More information about Reading Hydro can be found here.  There is also a Facebook page.

It is instructive to reckon the power output of the Reading Hydro facility, in terms of the amount of coal, say, that it effectively displaces from electricity production. There are different types of coal, and which differ in the amount of energy they deliver on combustion, but let’s assume 30 GJ/tonne (i.e. high quality anthracitic coal):

By direct energy-for-energy reckoning, 320 MWh is equivalent to 38.4 tonnes of coal (30 GJ/tonne), but to allow for Carnot Cycle losses in the coal-fired power plant, we need to multiply by 2.47 = 95 tonnes per year, or a quarter of a tonne of coal saved per day.
Posted by Professor Chris Rhodes at 4:52 pm

You have the water flow a bit out, each turbine uses 3m^3 per second, 'cumecs' so 6 cumecs for both turbines.

Yes, but I'm talking about the overall flow of the river, which averages at 37 m^3. Good point though, Stuart, so I'll clarify that now!

My first novel University Shambles is available at http://www.universityshambles.com/